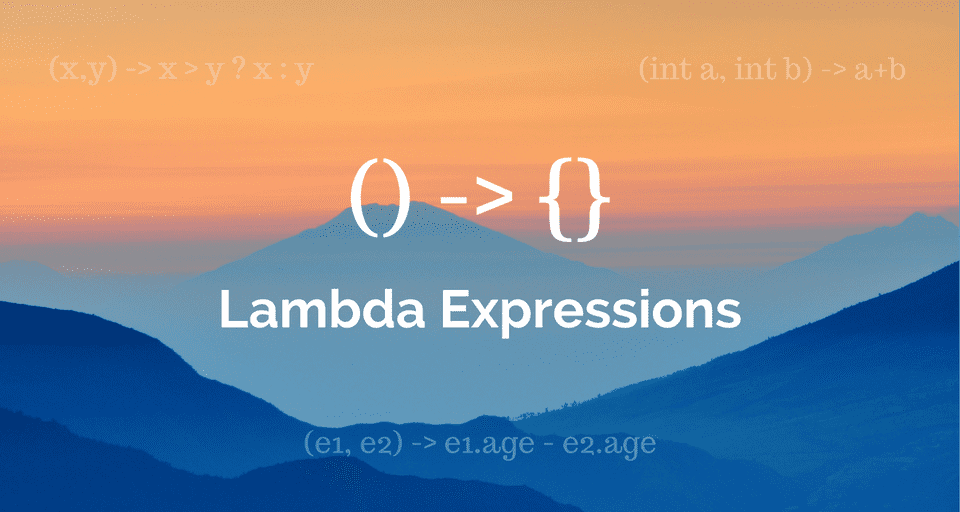 Lambda expressions were introduced in Java 8 and they became the talk of the town as soon as they arrived.

Java has evolved a lot with time. It has incorporated new ideas and programming paradigms as and when necessary. That is the main reasons why It is still the most used language worldwide.

Functional programming was on the rise when Lambda expressions were introduced in Java 8.

In this article, you’ll learn what lambda expression is, how it works under the hood, and how to use it effectively in your programs.

The need for lambda expressions

Java is a pure object oriented programming language. Everything in Java is an Object with the exception of primitive types.

You can’t define top level functions (functions that don’t belong to a class) in Java. You can’t pass a function as an argument, or return a function from another function.

So, what’s the alternative?

Before lambda expressions were introduced, Developers used to use Anonymous class syntax for passing functionality to other methods or constructors.

Now, To sort a list of employees, we usually pass a custom comparator to the List.sort() method as described in the following example -

In the above example, we wanted to pass a single compare() functionality to the sort() method for comparing two Employees.

For doing this, we had to create an anonymous comparator object with the implementation of the compare() function, and pass it in the sort() method.

Consider another example of an anonymous Runnable -

In this example, we wanted to create a thread and pass a function that needs to be executed by the thread.

For doing this, we had to create an anonymous Runnable object with the implementation of the run() method and pass the object to the Thread() constructor.

You’re getting the point right? Since you can’t pass functions directly as method arguments, You need to write all that boilerplate code all the time.

I agree that anonymous class syntax is more compact than defining a named class, instantiating it and then passing the instance as an argument. It is still too much for classes with only one method.

Can we do better? Is there a simpler way of passing a single functionality to other methods?

Lambda expression allows you to pass functionality to other methods in a less verbose and more readable way.

If the method body consists of a single line, then you can omit the curly braces and the return keyword as well -

Moreover, Since Java is aware about the types of arguments from the surrounding context, you can omit the type declarations as well -

Whoa! Compare that with the earlier implementation without lambda expression. This is so concise, readable, and to the point.

What about the Runnable example? Well, Here is how you would write that using lambda expression -

Syntax and Examples of Lambda Expressions

Lambda expressions in Java has the following syntax -

Note that, the type declaration can be omitted from the arguments because the compiler can infer the types of arguments from the surrounding context -

Here are some examples of lambda expressions -

Lambda Expressions Under the Hood

Contrary to other functional programming languages, lambda expressions in Java do not correspond to functions.

Lambda expressions in Java are instances of Functional Interfaces. A functional interface is an interface that contains exactly one abstract method.

Although, any interface with a single abstract method can be used as a lambda expression. To make sure that the interface meets the requirements of a functional interface, you should add a @FunctionalInterface annotation like so -

Java 8 comes with a bunch of built-in functional interfaces. All of them are defined in the java.util.function package. Check out the Official Java Doc for more information.

Understanding the relation between lambda expressions and functional interfaces

It can be mapped to any functional interface whose abstract method takes no arguments and returns void.

For example, It can be mapped to a Runnable interface because a Runnable contains a single abstract method run() that takes no arguments and returns void -

This lambda expression can be mapped to any functional interface whose abstract method takes a single argument and returns void.

All of the above functional interfaces are defined in java.util.function package.

Lambda expression was one of the key features of Java 8. It was the first step towards functional programming in Java.

In this article, I’ve tried to explain the need for lambda expressions, how to use it in your programs and how it fits in the Java’s type System.

I hope this article was helpful to you. Thank you for reading folks. See you in the next post!

In this article, you'll learn how to use Docker compose to run a full-stack application built with Spring Boot, Mysql, and React.