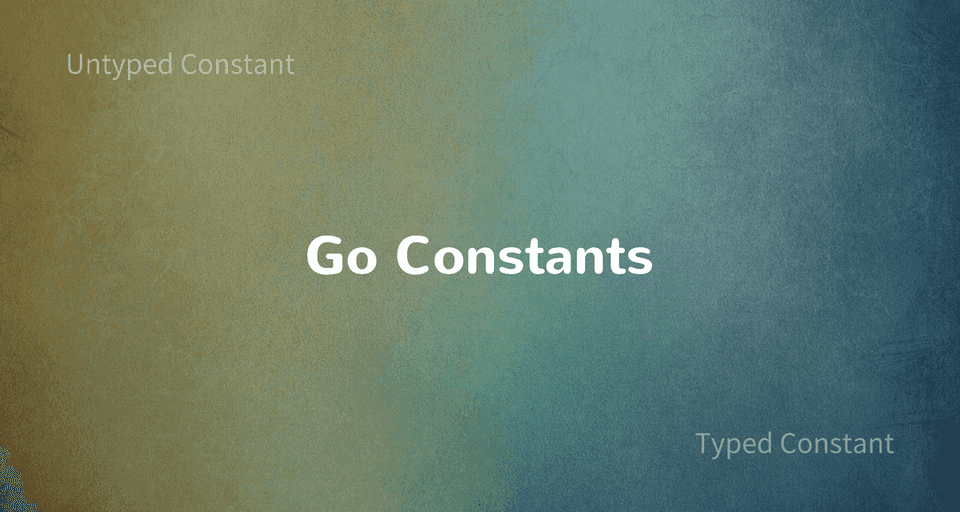 In Golang, we use the term constant to represent fixed (unchanging) values such as 5, 1.34, true, "Hello" etc.

Literals are constants without a name. To declare a constant and give it a name, you can use the const keyword like so -

You can also specify a type in the declaration like this -

Multiple declarations in a single statement is also possible -

Constants, as you would expect, cannot be changed. That is, you cannot re-assign a constant to a different value after it is initialized -

Constants in golang are special. They work differently from how they work in other languages. To understand why they are special and how they exactly work, we need some background on Go’s type system. So let’s jump right into it -

Go is a statically typed programming language. Which means that the type of every variable is known or inferred by the compiler at compile time.

For the above operations to work, you’ll need to explicitly cast the variables so that all of them are of the same type -

If you’ve worked with other statically typed languages like C, C++ or Java, then you must be aware that they automatically convert smaller types to larger types whenever you mix them in any operation. For example, int can be automatically converted to long, float or double.

So the obvious question is that - why doesn’t Go do the same? why doesn’t it perform implicit type conversions like C, C++ or Java?

The convenience of automatic conversion between numeric types in C is outweighed by the confusion it causes. When is an expression unsigned? How big is the value? Does it overflow? Is the result portable, independent of the machine on which it executes? It also complicates the compiler; “the usual arithmetic conversions” are not easy to implement and inconsistent across architectures. For reasons of portability, we decided to make things clear and straightforward at the cost of some explicit conversions in the code. (Excerpt from Golang’s official doc)

All right! So Go doesn’t provide implicit type conversions and it requires us to do explicit type casting whenever we mix variables of multiple types in an operation.

But how does Go’s type system work with constants? Given that all of the following statements are valid in Golang -

What is the type of the constant value 10 in the above examples? Moreover, if there are no implicit type conversions in Golang, then wouldn’t we need to write the above statements like -

Well, the answers to all theses questions lay in the way constants are handled in Golang. So let’s find out how they are handled.

Any constant in golang, named or unnamed, is untyped unless given a type explicitly. For example, all of the following constants are untyped -

They are untyped even after you give them a name -

Well yes, the value 1 is an integer, 4.5 is a float, and "Hello" is a string. But they are just values. They are not given a fixed type yet, like int32 or float64 or string, that would force them to obey Go’s strict type rules.

Note that, Although the value 1 is untyped, it is an untyped integer. So it can only be used where an integer is allowed. You cannot assign it to a string or a boolean variable for example.

Let’s now see an example of an untyped string constant-

In Golang, you can create a type alias using the type keyword like so-

But, you can assign an untyped string constant to a RichString variable because it is compatible with strings -

Go supports type inference. That is, it can infer the type of a variable from the value that is used to initialize it. So you can declare a variable with an initial value, but without any type information, and Go will automatically determine the type -

Well, it turns out that every untyped constant in Golang has a default type. The default type is used when we assign the constant to a variable that doesn’t have any explicit type available.

Following are the default types for various constants in Golang -

So, in the statement var a = 5, since no explicit type information is available, the default type for integer constants is used to determine the type of a, which is int.

In Golang, Constants are typed when you explicitly specify the type in the declaration like this-

Just like variables, all the rules of Go’s type system applies to typed constant. For example, you cannot assign a typed integer constant to a float variable -

With typed constants, you lose all the flexibility that comes with untyped constants like assigning them to any variable of compatible type or mixing them in mathematical operations. So you should declare a type for a constant only if it’s absolutely necessary. Otherwise, just declare constants without a type.

The fact that constants are untyped (unless given a type explicitly) allows you to mix them in any expression freely.

The evaluation of constant expressions and their result follows certain rules. Let’s look at those rules -

To get the correct result, you can do one of the following:

What will be the result of the above program?

Well, it’s not 17. The actual result of the above program is 16.5. Let’s go through the evaluation order of the expression to understand why the result is 16.5

You got it right? The result is wrong because the expression 25/2 is evaluated to 12.

To get the correct result, you can do one of the following:

Untyped constants are an amazing design decision taken by Go creators. Although Go has a strong type system, You can use untyped constants to escape from Go’s type system and have more flexibility when working with mixed data types in any expression.

Next Article: Golang Control Flow Statements: If, Switch and For