Concurrency is the ability to do more than one thing at the same time.

Back in early days, computers could execute only one program at a time. But now, modern computers are capable of running a whole lot of tasks at the same time. For example -

Softwares that are able to do more than one thing at a time are called concurrent software.

The following screenshot of my computer shows an example of concurrency. My computer system is doing multiple things simultaneously - It is running a video on a media player, accepting keyboard input on a terminal, and building a project in IntelliJ Idea. 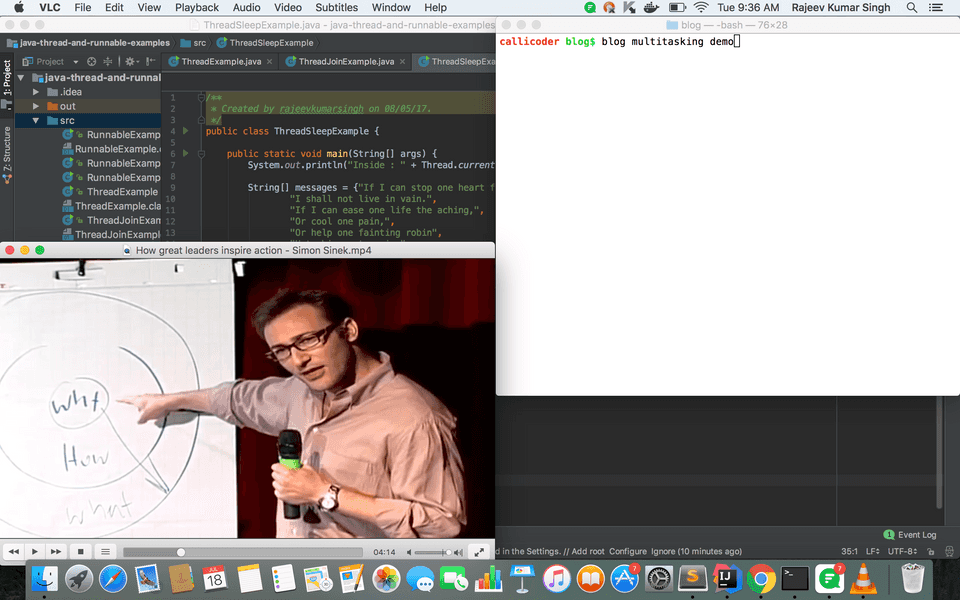 Concurrency: Under the Hood

Ok! I understand that computers are able to run multiple tasks at a time, but how do they do it?

I know that computers, nowadays, come with multiple processors, but isn’t concurrency possible on a single processor system as well? Also, computers can execute way more tasks than the number of processors available.

How can multiple tasks execute at the same time even on a single CPU?

Well! It turns out, that, they don’t actually execute at the same physical instant. Concurrency doesn’t imply parallel execution.

The tasks are executed in an interleaved manner. The operating system switches between the tasks so frequently that it appears to the users that they are being executed at the same physical instant.

Therefore, Concurrency does not mean Parallelism. In fact, Parallelism is impossible on a single processor system.

Concurrency is a very broad term, and it can be used at various levels. For example -

Let’s talk about the two basic units of concurrency : Processes and Threads.

A Process is a program in execution. It has its own address space, a call stack, and link to any resources such as open files.

A computer system normally has multiple processes running at a time. The operating system keeps track of all these processes and facilitates their execution by sharing the processing time of the CPU among them.

A thread is a path of execution within a process. Every process has at least one thread - called the main thread. The main thread can create additional threads within the process.

Threads within a process share the process’s resources including memory and open files. However, every thread has its own call stack.

Since threads share the same address space of the process, creating new threads and communicating between them is more efficient.

Although, concurrency can be used at various levels, In this tutorial series, we’ll focus on concurrency at thread level. i.e. multithreading.

In the next blog post, we’ll learn how to create new threads and run some task inside those threads.

Thank you for reading my blog. Please ask any doubts in the comment section below.