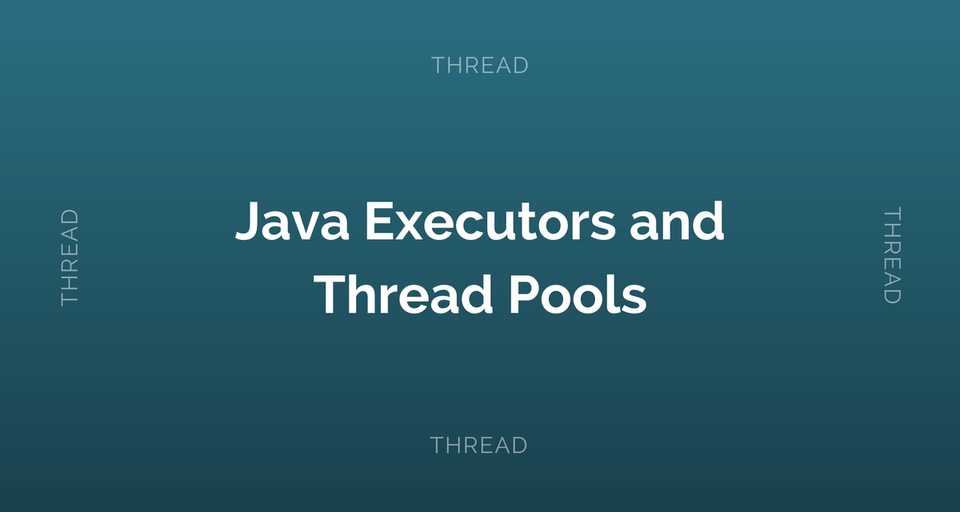 Welcome to the third part of my tutorial series on Java concurrency. In this tutorial, we will learn how to manage threads in our application using executors and thread pools.

In the previous tutorial, we learned how to create threads in Java by extending the Thread class or implementing the Runnable interface.

While it is easy to create one or two threads and run them, it becomes a problem when your application requires creating 20 or 30 threads for running tasks concurrently.

Also, it won’t be exaggerating to say that large multi-threaded applications will have hundreds, if not thousands of threads running simultaneously. So, it makes sense to separate thread creation and management from the rest of the application.

Enter Executors, A framework for creating and managing threads. Executors framework helps you with -

Apart from the above three interfaces, The API also provides an Executors class that contains factory methods for creating different kinds of executor services.

All right! let’s dive into an example now to understand things better. In the following example, we first create an ExecutorService with a single worker thread, and then submit a task to be executed inside the worker thread.

The above example shows how to create an executor service and execute a task inside the executor. We use the Executors.newSingleThreadExecutor() method to create an ExecutorService that uses a single worker thread for executing tasks. If a task is submitted for execution and the thread is currently busy executing another task, then the new task will wait in a queue until the thread is free to execute it.

If you run the above program, you will notice that the program never exits, because, the executor service keeps listening for new tasks until we shut it down explicitly.

ExecutorService provides two methods for shutting down an executor -

In the earlier example, we created an ExecutorService that uses a single worker thread. But the real power of ExecutorService comes when we create a pool of threads and execute multiple tasks concurrently in the thread pool.

In a fixed thread-pool, the executor service makes sure that the pool always has the specified number of threads running. If any thread dies due to some reason, it is replaced by a new thread immediately.

When a new task is submitted, the executor service picks one of the available threads from the pool and executes the task on that thread. If we submit more tasks than the available number of threads and all the threads are currently busy executing the existing tasks, then the new tasks will wait for their turn in a queue.

Most of the executor implementations use thread pools to execute tasks. A thread pool is nothing but a bunch of worker threads that exist separately from the Runnable or Callable tasks and is managed by the executor.

Creating a thread is an expensive operation and it should be minimized. Having worker threads minimizes the overhead due to thread creation because executor service has to create the thread pool only once and then it can reuse the threads for executing any task.

We already saw an example of a thread pool in the previous section called a fixed thread-pool.

Tasks are submitted to a thread pool via an internal queue called the Blocking Queue. If there are more tasks than the number of active threads, they are inserted into the blocking queue for waiting until any thread becomes available. If the blocking queue is full than new tasks are rejected. 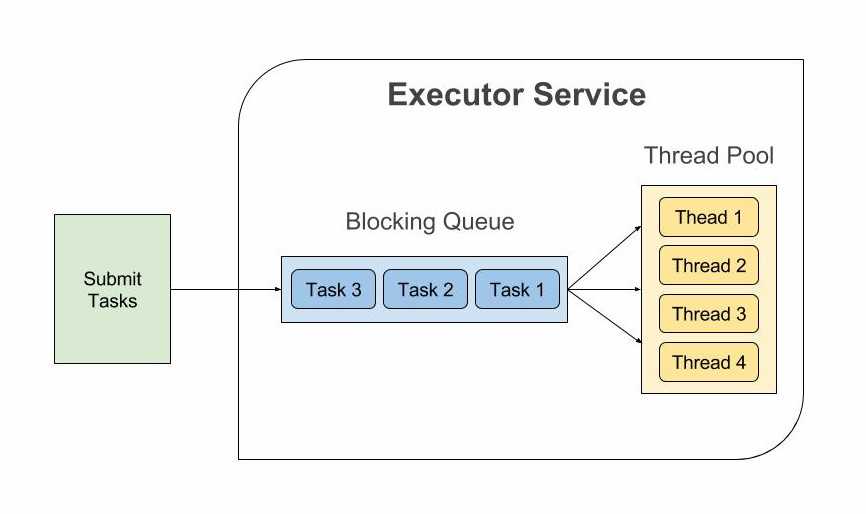 ScheduledExecutorService is used to execute a task either periodically or after a specified delay.

In the following example, We schedule a task to be executed after a delay of 5 seconds -

scheduledExecutorService.schedule() function takes a Runnable, a delay value, and the unit of the delay. The above program executes the task after 5 seconds from the time of submission.

scheduledExecutorService.scheduleAtFixedRate() method takes a Runnable, an initial delay, the period of execution, and the time unit. It starts the execution of the given task after the specified delay and then executes it periodically on an interval specified by the period value.

Note that if the task encounters an exception, subsequent executions of the task are suppressed. Otherwise, the task will only terminate if you either shut down the executor or kill the program.

In this blog post, we learned the basics of executors and thread pool. However, we have not yet covered all the features that executor service offers because for covering those features, we first need to understand two more topics - Callable and Future. We’ll cover these topics in the next blog post.

All the code samples used in this tutorial can be found in my github repository. Please ask any doubts or clarifications in the comment section below.