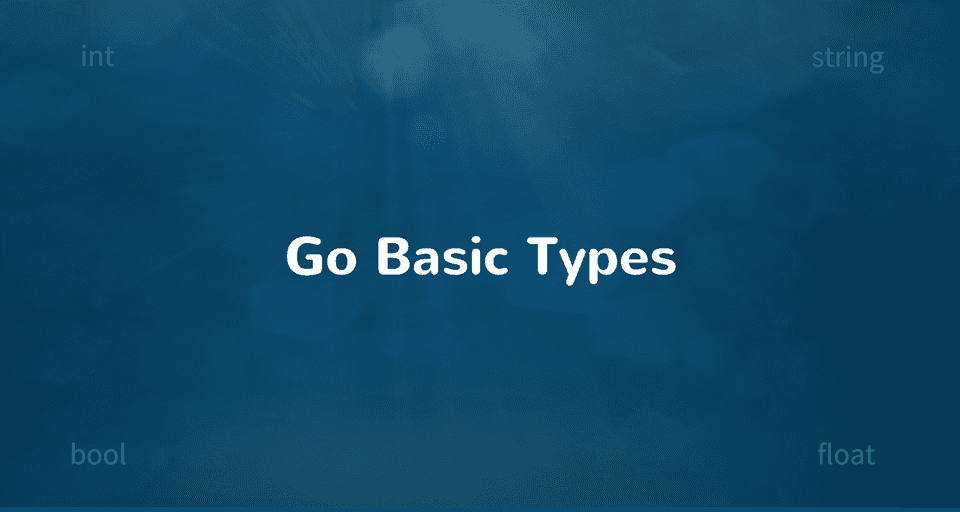 Go is a statically typed programming language. Every variable in Golang has an associated type.

Data types classify a related set of data. They define how the data is stored in memory, what are the possible values that a variable of a particular data type can hold, and the operations that can be done on them.

Golang has several built-in data types for representing common values like numbers, booleans, strings etc. In this article, We’ll look at all these basic data types one by one and understand how they work.

Numeric types are used to represent numbers. They can be classified into Integers and Floating point types -

When you are working with integer values, you should always use the int data type unless you have a good reason to use the sized or unsigned integer types.

In Go, the byte and rune data types are used to distinguish characters from integer values.

Characters are expressed in Golang by enclosing them in single quotes like this: 'A'.

The default type for character values is rune. That means, if you don’t declare a type explicitly when declaring a variable with a character value, then Go will infer the type as rune -

You can create a byte variable by explicitly specifying the type -

Both byte and rune data types are essentially integers. For example, a byte variable with value 'a' is converted to the integer 97.

Similarly, a rune variable with a unicode value '♥' is converted to the corresponding unicode codepoint U+2665, where U+ means unicode and the numbers are hexadecimal, which is essentially an integer.

The default type for floating point values is float64. So when you initialize a floating point variable with an initial value without specifying a type explicitly, the compiler will infer the type as float64 -

Here is an example demonstrating some of the above operators -

Go provides a data type called bool to store boolean values. It can have two possible values - true and false.

You can use the following operators on boolean types -

Here is an example of Boolean types-

Complex numbers are one of the basic types in Golang. Go has two complex types of different sizes -

Go also provides a built-in function named complex for creating complex numbers. If you’re creating a complex number with variables instead of literals, then you’ll need to use the complex function -

You can perform arithmetic operations like addition, subtraction, multiplication, and division on complex numbers -

In Go, a string is a sequence of bytes.

Strings in Golang are declared either using double quotes as in "Hello World" or back ticks as in `Hello World` .

Strings enclosed within back ticks are raw strings. They can span multiple lines. Moreover, Escape characters don’t have any special meaning in raw strings.

That’s all about Strings in this article. But there is a lot more to learn about strings which include string indexing, handling unicode characters, performing various operations like string concatenation, split, join etc. We’ll learn about them in a future article.

Unlike other statically typed languages like C, C++, and Java, Go doesn’t provide any implicit type conversion. To learn why Go is designed this way, check out the next article - Working with Constants in Golang.

All right! So we cannot add, subtract, compare or perform any kind of operation on two different types even if they are numeric. But what to do if we need to perform such operations?

Well, you’ll need to explicitly cast the variables to the target type -

The general syntax for converting a value v to a type T is T(v). Here are few more examples -

That’s all folks! In this article, you learned about various basic data types provided by Golang, the operations that can be done on those types, and how to convert one type to another.

Thanks for reading. Stay tuned for more articles.

Next Article: Working with Constants in Golang